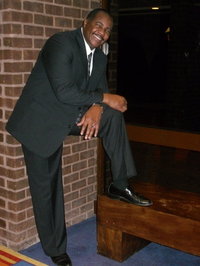 Master Instructor - Director - Producer - Entrepreneur - Visionary. The first african american to introduce video tape rentals and pizza delivery service to the inner city area of Baltimore, Maryland. The Video Zone was started in 1986, went on to created The Pizza Zone in 1987 and recently completed his latest venture...The Casino Express, during the summer of 2013.

The 8TH Degree Black Belt, along with Master L.R. Butcher, co-founded the U.S. Champions Karate Associations. This 1997- 99 Black Belt Hall Of Fame inductee, is one of Maryland's most respected "Living Legends" of Martial Arts. He studied martial arts for over 40 years and became one of Maryland's top martial arts promoters. During the 70's, 80' and 90's, his electrifying skills, help launch his career and he quickly became a champion in sparring, katas, weapons and self defense competition. Loved and admired by thousands around the world, he is also responsible for developing some of today's leading promoters and World Champions. Davis taught thousands and has changed lives all over the world. This messenger of peace process an amazing talent for uniting people and his formula for turning a stranger into a friend should be bottled and sold. As a major contributor to the martial arts entertainment world, he enjoy producing martial arts tournaments and television projects, it was the perfect vehicles for showcasing up and coming artists.

Understanding the importance of self discipline, building strong bodies and minds, and teaching others to make a difference in life, are some of the many tools use during this leadership course.

We are all servants of the Lord, so serve well, be careful who you follow and move with purpose. Please remember... how far we progress in life, will always be in proportion to our service to others. So,don't play the blame game... create a plan, execute and keep moving forward. Live your life and don't let the world pass you by.

Master Davis thanks God for allowing to him to have accomplish the following...

As a promoter Master Davis has promoted some the largest karate tournaments on the east coast such as: Champion Karate Tournaments I,II and III - The Silver Cup Invitational - Battle Of The Grand Champions - Duel Of The Superstars - War Zone' 84 - The Maryland Victory Cup - The East Coast Martial Arts Expo and the unbeatable BEST OF THE BEST Karate/Kung-Fu Championships. Master Davis has also served as game official for the United States Naval Academy and currently Master Instructor for Maryland Law Enforcement Officials.